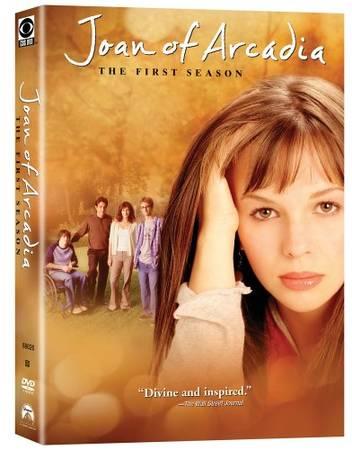 NEW, Still Sealed!! Once in awhile a show comes along that breaks the mold. Most such programs fail, but Joan of Arcadia set out to do something new, beat the odds, and found an audience. Created by Barbara Hall (Judging Amy), its a unique hybrid of My So-Called Life, The Commish, and--well, something different. Unlike CBS predecessor Touched by an Angel, faith creates more questions than answers (and God even has a sense of humor). Joan (Amber Tamblyn) is an ordinary 16-year-old. Father Will (Joe Mantegna) is the local Arcadia police chief, mother Helen (Mary Steenburgen) is a teacher/administrator, younger brother Luke (Michael Welch) is a fellow student, and older brother Kevin (Jason Ritter, son of John Ritter) is a high school graduate who was paralyzed the year before. He used to be popular and athletic. Now he watches TV and builds models. In the pilot, God speaks to Joan for the first time, as a cute boy, and asks her to get a job. Once she's convinced He's really God, she does. Her action inspires Kevin to get one, too, and his process of rejoining the world begins. As in Joan Osbornes theme song, "One of Us" (featured on two episodes), God will continue to appear to Joan in a variety of guises--even as a dog walker who looks like Russ Tamblyn (Amber's father). Hell often ask her to do things that make her uncomfortable, but she'll always learn from the experience and some good will always come from it. Unfortunately, she isn't able to talk to anyone about this or they'd think she was crazy, not even friends Grace (Becky Hahlstrom) or Adam (Christopher Marquette). By the season finale, faith will be replaced by doubt, setting the scene for the second season, in which Joans faith will be restored.