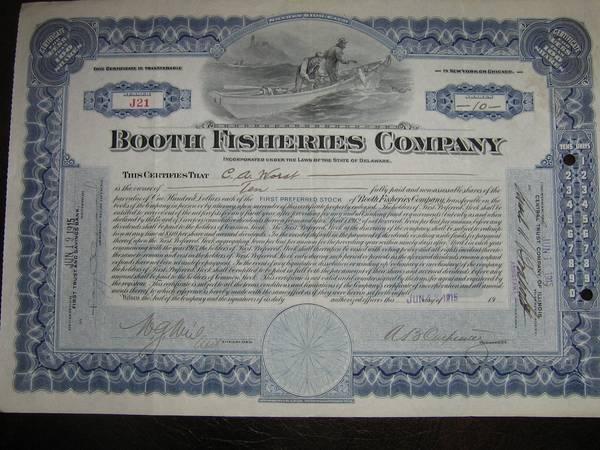 Authentic red serial-numbered 1915 preferred stock certificate for Booth Fisheries Company. Document features a dark blue border with unique white fissures throughout. Bottom-center of document contains light-blue embossed pinwheel as a corporate seal containing company name. Some of the interior document is also shaded light-blue, including the large lettered under-print denoting these as First Preferred shares. Left and right edges contain signature blocks for the Registrar (First Trust and Savings Bank) and the Transfer Agent (Central Trust Company of Illinois). Western Bank Note & Eng. Co. of Chicago produced this handsome document hand-signed by both the company asst. treasurer and its president. The top-center engraved vignette depicts an oared 16-18 foot wooden rowboat with two hatted fisherman standing up. I see no traditional fishing poles. Instead, on the edge of the rowboat I see an attached pulley device which appears to accommodate a thin chain to glide back and forth when pulled. One end of the chain has one lead, but the other end has four leads (of varying length?) onto which a fisherman could attach four baited hooks and simply drop the chain into the water until fish bite. If that seems far-fetched, the southeastern coastal waters of Newfoundland (eastern Canada) hosted the most flourishing cod fishing in the world in the early 20th century. Document is in Excellent condition with no flaws. Measures 12 7/16 X 8 9/16 inches. Alfred Booth was a controversial and powerful entrepreneur in the wholesale fishing industry emigrated from England to Kenosha WI in 1847, he re-settled in Chicago by 1850 to open a small fish and vegetables store on Randolph Street. By 1857 Booth relocated his business to a larger downtown facility on Dearborn and Madison Streets where he purchased fish from Lake Michigan fishermen and sold them locally on the streets using a pushcart. His Chicago-based A. Booth Fish Company dominated the entire Great Lakes region by the start of World War 1 thanks to aggressive expansion during the 1890's when Booth purchased numerous other struggling fisheries and grew his own firm into a virtual monopoly that lasted until the early 1920's.